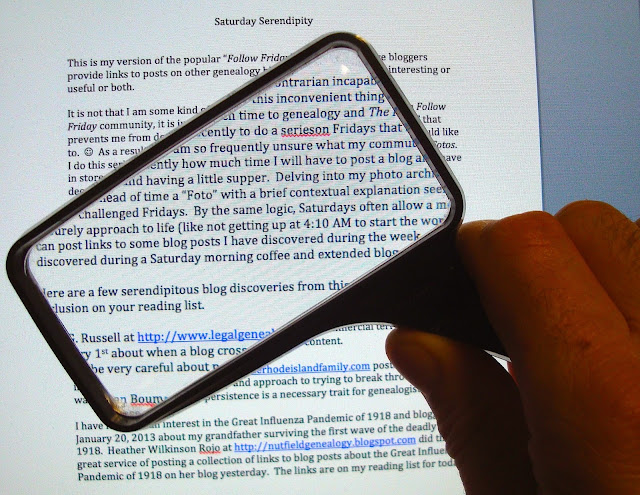 The picks for this week's Saturday Serendipity are as follows .  .  .

1.     Marion Wood of Climbing My Family Tree blog, has a nice post about research creativity and tenacity.  Marian describes and illustrates her use of the 1915 and 1925 NY state census, a cousin's imaginative detective work in the 1900 US Census, Marian's use of the subsequent 1920 Census, and a map of the Bronx.  Did I mention this work was in search of determining when her maternal great aunt, Regina Farkas, was awarded a "Penmanship Certificate for General Proficiency in Muscular Movement Writing?"  A cousin of Marian's sent her the undated certificate and Marian's well developed genealogy curiosity sent her on a mission to determine when the certificate was awarded.  To read the well-documented research journey Marian embarked on -- and to see if she answered her question -- read the blog post "Researching Regina's Penmanship Award."

2.     This week The Weekly Genealogist of NEHGS had three interesting links to stories worth reading.  (1) A short piece by Laura Roselle, a Political Science professorat Elon University, discusses the importance of telling family stories and offers four guidance tips for writing the stories.  Read "How to tell family stories." (2)  Many New Englanders will be aware of the famous Boston Post cane.  As a PR advertisement idea in 1909, the newspaper created and sent out to 700 New England towns an ebony cane with an engraved 14-karat gold knob head.  The canes were to be presented to the oldest male in each town (in the 1930s the rule changed so that the oldest woman was included also).  The Boston Post no loger exists but some of the canes still do and are purportedly presented to the oldest citizens in towns to this day.  The town of Ashland, Massachusetts had its cane until the 1970s when it somehow disappeared.  Read "Ashland recovers long-lost Boston Post Cane," see photos of the cane, and learn what will be done with the cane.  (3)  If you are curious about the only season in the English language to have two widely accepted and used names, read the seasonally appropriate piece, "The Reason Why Americans Refer to Autumn as Fall."

3.     Vita Brevis, the NEHGS blog, also had an interesting piece this week.  Titled, "Understanding Leaf Hints," the article could be subtitled "Beware The Leaf Hints." Author, Christopher C. Child, presents an engaging and very interesting research quest to find a descendant of Benjamin Pierce (1757-1839) Governor of New Hampshire and father of President Franklin Pierce, who might have inherited the hereditary membership eligibility in the Soceity of the Cincinnati.  The quest started on Ancestry.com and continued based on a leaf hint.  As the author writes, it became a wild goose chase after a false match.

4.     One of the exciting eureka moments in genealogy research is finding information beyond the basic vitals of birth, death, marriage, children, divorce, baptism, etc. etc.  The discovery of reliable intel that gives detailed insight to the everyday experiences of an ancestor or relatives is pure genealogy gold.  It fleshes out the person and the life he or she actually lived and experienced.  It evokes in a way that simple, dry data points can never do.  It is the closet thing you can get to a conversation with a departed ancestor or relative where you can ask, "Well what was it like to _______?"  This week Nancy Messier of My Ancestors and Me blog shares the discovery of just such genealogy gold.  See if you agree by reading A 600 Bushel Harvest.

5.     Hmmmm, a genealogy with 498,980,000 individual entries?  That is a mere 1,020,000 folks short of half a billion ancestors in a family tree!  Wow.  James Tanner of Genealogy's Star blog brings this amazing claim for having the largest single interconnection family tree to our attention in "The Largest Single Family Tree."  The tree is "part of the FamilySearch.org Family Tree."  The mind boggles at the idea of a tree of nearly half a billion people. 😀