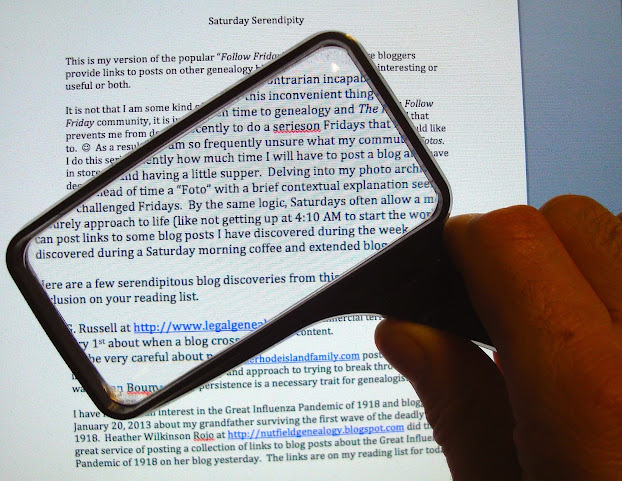 The following are suggested reads for this weekend.
1.   American Ancestors/NEHGS has just announced the FREE availability of over 100 online video lectures and webinars.  You can review the wide variety of subjects by going here.
2.   Jacqi Stevens, of A Family Tapestry blog, wrote today about her indexing of U.S. Naturalization Records and stated, "I was indexing–and again, from New Jersey, close enough to perhaps help some shirttail relatives of my New York immigrant kin."  The term "shirttail relative" is not one you see very often these days.  Apparently it is largely a U.S. term and has supposedly been around since the 1950s. This led to an old 2012 blog posting by Susan F., of It's a long long journey blog and her exploration into a shirttail relative.  It is an Irish story involving several families--so diagraming might be helpful, but the essence of the shirttail idiom comes through clearly.  You can read Susan's story here.  [ N.B. -- One reasonable explanation for the use of "shirttail" to descibe a close friend who has been given the status of honorary relative–or an actual, but very distant relative–is that the tail of a shirt is the farthest part of the garment that is tucked away, ignored and out of sight from the daily conspicuous, shown parts.  In the same way very distant relatives or particularly close non-relative friends are there and part of the overall function of a family, but they are like a shirttail tucked away and out of sight most of the time.]
3.   James Tanner, of Genealogy's Star blog, has initiated another multi-post topic.  Read Part I of "How do geneaogically significant records get preserved?" here.
4.   Read here the quick, succinct words of wisdom from Janine Adams, professional organizer and author of Organize Your Family History blog.  Now if I can only finally and successfully implement this great advice!
5.   The Weekly Genealogist of American Ancestors/NEHGS highlighted an article this week announced on Jewish News about the availability of a newly digitized Holocaust database that makes nearly 20 million records relating to the Holocaust and Nazi persecution accessible for free.  The project was made possible by the collaboration of Steven Spielberg's Shoah Fondation, UNESCO's Arolsen Archives Collection, and Ancestry.  You can read more about the project and get the link to its location on Ancestry by going here.
_ _ _ _ _ _ _ _ _ _ _ _ _ _ _ _
Copyright 2020, John D. Tew
_ _ _ _ _ _ _ _ _ _ _ _ _ _ _ _
Posted by John on Saturday, September 12, 2020