Heather Wilkinson Rojo of Nutfield Genealogy started an Honor Roll Project in 2010.  The goal of the project is to post photos of various war memorials and honor rolls along with the transcriptions of the names on the memorials/honor rolls in order to make the names available for search engines so people can search for family members, ancestors and friends.  This is a VERY worthwhile project and I want to participate in even a small way to support Heather (my blogging mentor and, incidentally, a distant cousin).  Unfortunately, the photo I have to contribute was taken years ago and before the project existed.  As a consequence, while I have a picture of the memorials, I do not have a transcription of all the names appearing on the memorial.  Perhaps I will be able to correct that on a future trip back to New England.

The photograph above is of the Town Hall in Wallingford, Connecticut.  It was formerly the Lyman Hall High School in Wallingford (named for Dr. Lyman Hall a signer of the Declaration of Independence who was born in Wallingford).  My father briefly attended the school when it was still at is original location on South Main Street.  The school was relocated to a new building in 1957 and still operates, but the original building is now the Wallingford Town Hall.   There are at least two honor roll memorials outside the Town Hall building -- one for the Korean War (pictured above) and one for World War II (pictured below).  My father was in the Merchant Marine during WWII and his name is on the WWII Honor Roll in Wallingford. 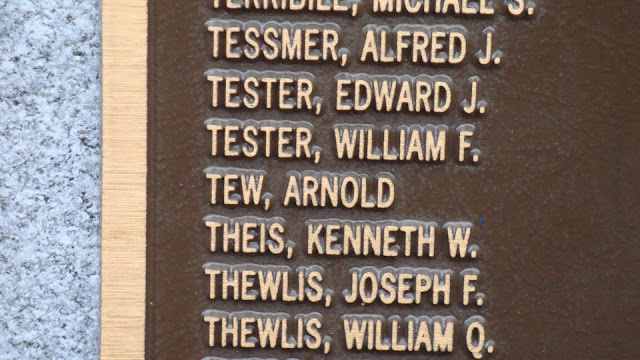 The only close-up of the WWII Honor Roll that I have is a small section in the Ts where my father's name appears.  The photo is shown above with seven names clearly seen.  They are: